2-1 Introduction
In studying Control Systems, we need to be able to model dynamic systems in mathematical terms and analyze their dynamic characteristics. We can represent the dynamic system by using a set of differential equations. Keep in mind that there is not one single set of differential equations that govern a system, there may be others that are valid depending on the perspective. We can obtain these differential equations using fundamental laws that govern a particular system (ie. Newton's Laws for Mechanical Systems, Kirchhoff's Laws for Electrical Systems, ect.). Obtaining and deriving these equations are the most important part of the entire analysis of control systems! ​
Throughout all of our material, we will assume causality, by which the current output (at t=0) depends on the past input (at t<0) but does not depend on the future input (a t>0).
​
2-2 Transfer Function and Impulse Response Function
Transfer Functions for linear, time-invariant, differential equation systems are defined as the ratio of the Laplace Transform of the output to the Laplace of the input under the assumption that all initial conditions are zero.
Consider the linear time-invariant system defined by the following differential equation:

Where y is the output of the system, and x is the input. The transfer function of this system is the ratio seen below:​

Using Transfer Functions we can represent system dynamics by algebraic equations in the s domain. The order of the system is said to be the highest order of s which as seen in the equation above is represented by n, which we consider to be an "nth-order system".

Important Notes about Transfer Functions:
Convolution Integral
Let's consider that we have a given transfer function as defined by G(s):

From this extraction we can then use the convolution integral we talked about above to take the inverse Laplace Transform of the complex function to find what the transfer function g(t) is in the time domain, g(t) is also called the weighting function of the system.

It is hence possible to obtain complete information about the system dynamics by exciting it with an impulse input and measuring the response. While the ability to create impulse function in real life do not exist, pulse inputs with a very short duration can be considered an impulse.
2-3 Automatic Control Systems
A complete control system may be comprised of multiple components. In order to show the functions performed by each component, in control engineering we utilize what are known as block diagrams. A block diagram of a system is a pictorial representation of the functions performed by each component and the flow of signals. These diagrams have the advantage over mathematical models of being able to indicate more realistically the signal flow of the system. The figure below indicates a single element of the block diagram, you can see the arrow point into the block being the input signal, and the arrow pointing out being the output signal. 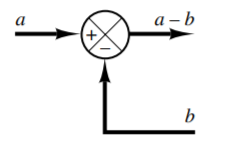 A branch point differs from summing point in which it is a point from which the signal from a block goes concurrently to other blocks or summing points.

​Block Diagram of a Closed-Loop System
As we had talked about before, a closed loop system is created by feeding the output of the system back into a transfer function which is then compared to a reference value which is then fed back into the system as an input. As seen from the diagram below, output C(s) is fed back to the summing point  after being multiplied by H(s) where it is then compared to the reference R(s). It is a reasonable question to ask why we have H(s) and not directly just feed C(s) into the summing point, this is because often the dimension is different. For example C(s) may be temperature in Celsius, but most electrical systems in order to use this temperature as a feedback input must first convert it into a voltage using a thermistor/thermocouple. H(s) represents the transfer function of the sensor that is responsible for the conversion from temperature to voltage.

From the system above we can come up with the transfer function quite simply by relating the output C(s) to the input R(s) by using the following relations:

Open-Loop Transfer Function and Feed-forward Transfer Function
By examining the picture provided by the Closed-Loop System, you can see that the ratio of the feedback B(s) to the actuating error signal E(s) is known as the  open-loop transfer function

Another important transfer function and what makes for the basis of Open-Loop system is known as the feed-forward transfer function, which can be seen from the closed loop system diagram by the ratio of C(s) to the actuating error signal E(s). 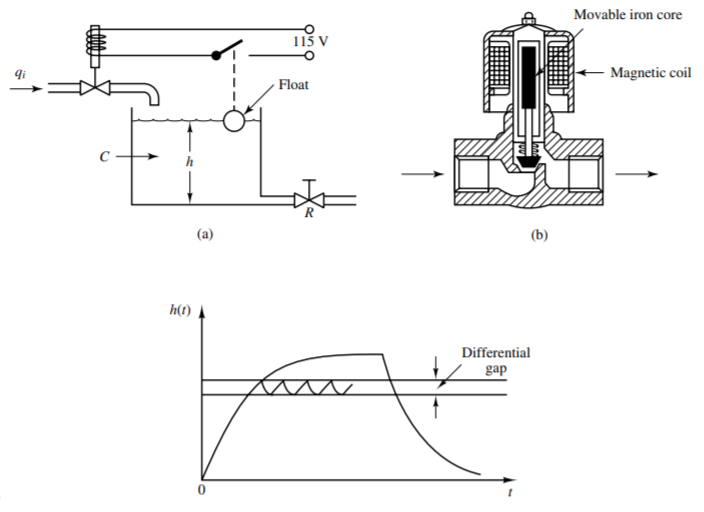 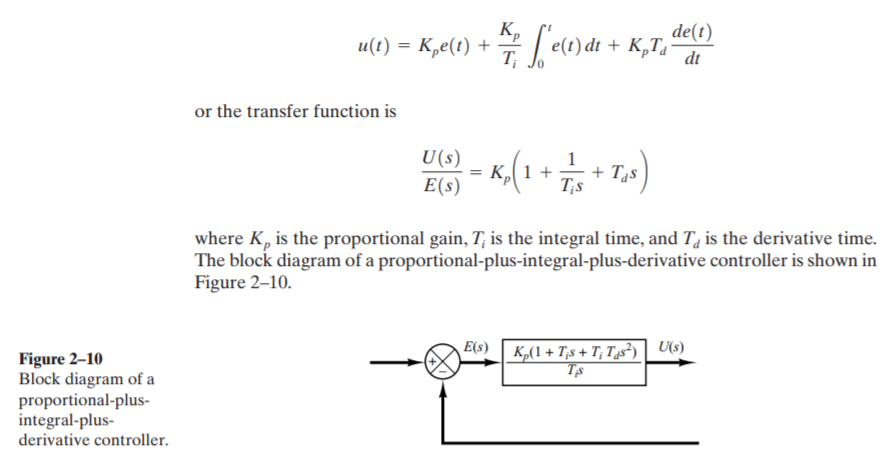 Procedures for Drawing a Block Diagram
To draw a block diagram for a system, first write each of the equations that describe the dynamic behavior of each component. Then take the Laplace transform of each of these equations. Then you can assemble these pieces into a block diagram. Here is an example: 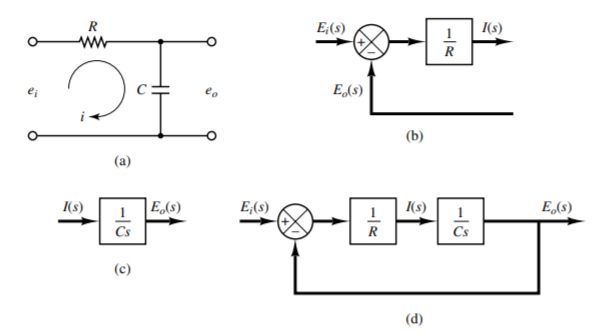 Block Diagrams Reduction
When blocks are in series with one another they can be simplified into a single block by multiplying the two transfer functions. If however the diagram is more complex with multiple feedback portions a step by step rearrangement is necessary for simplification, as seen in the example below. You can see that by my multiplying or dividing the the transfer functions we can move where the arrow points in the system. 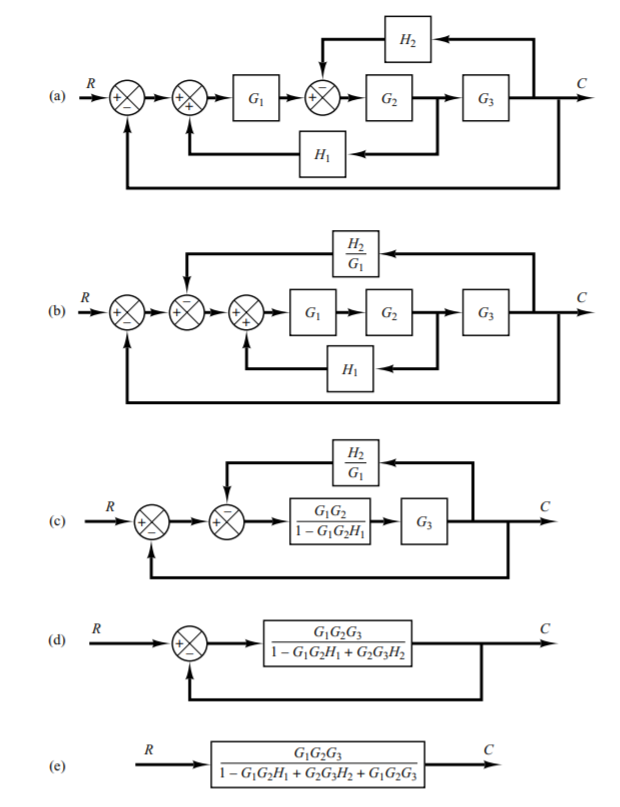 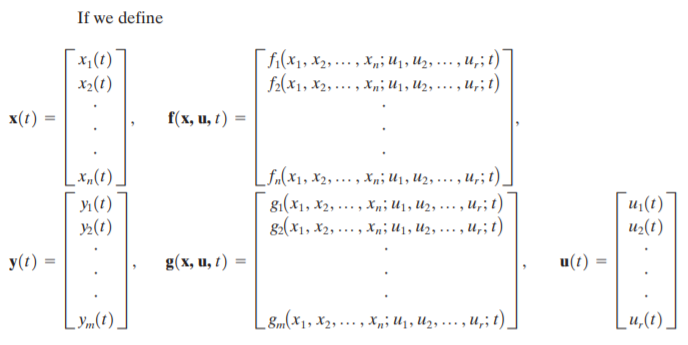 By combining the equations above, we can simplify ẋ(t) and y(t)

If we linearize the equations above about the operating state we get the following state equations: 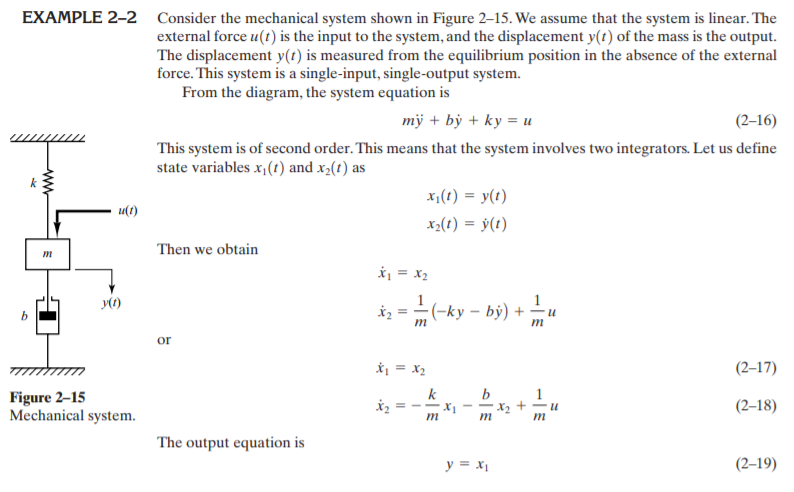 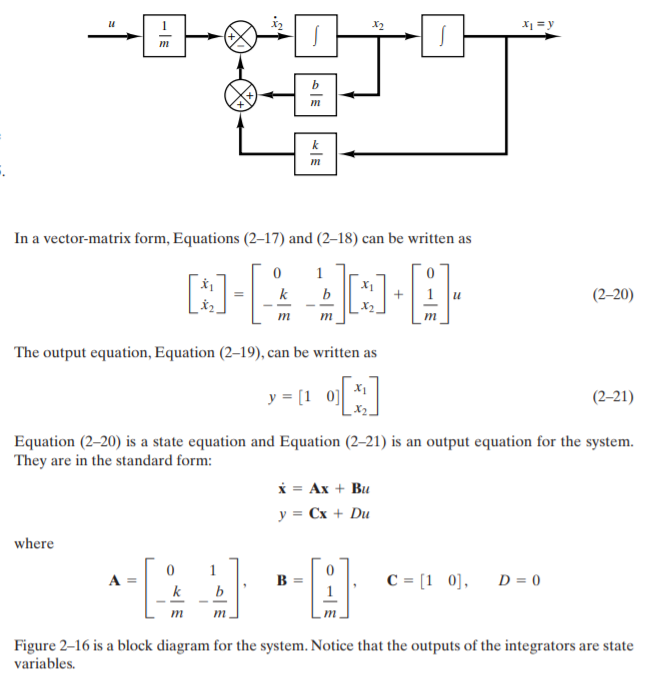 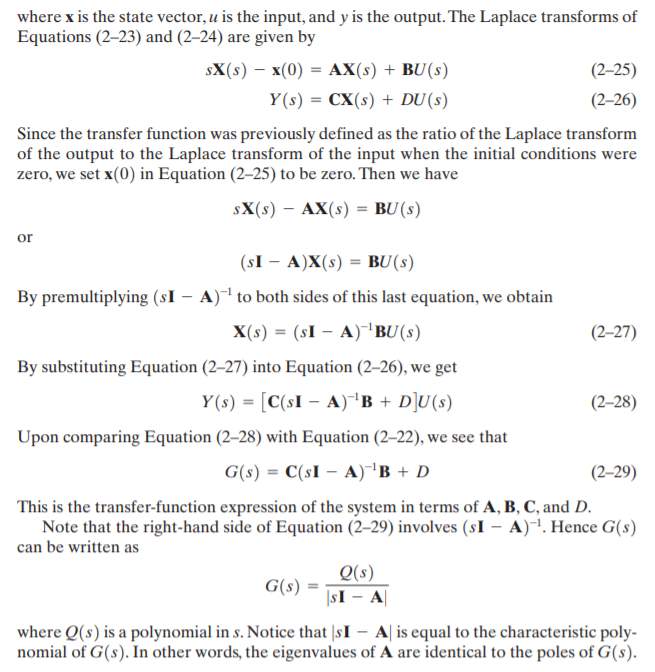 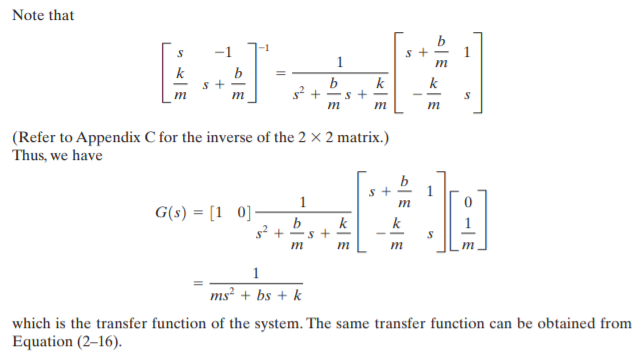 This is very similar to the approach we took above, but with an n-th order differential equation, so the state vector is size n. 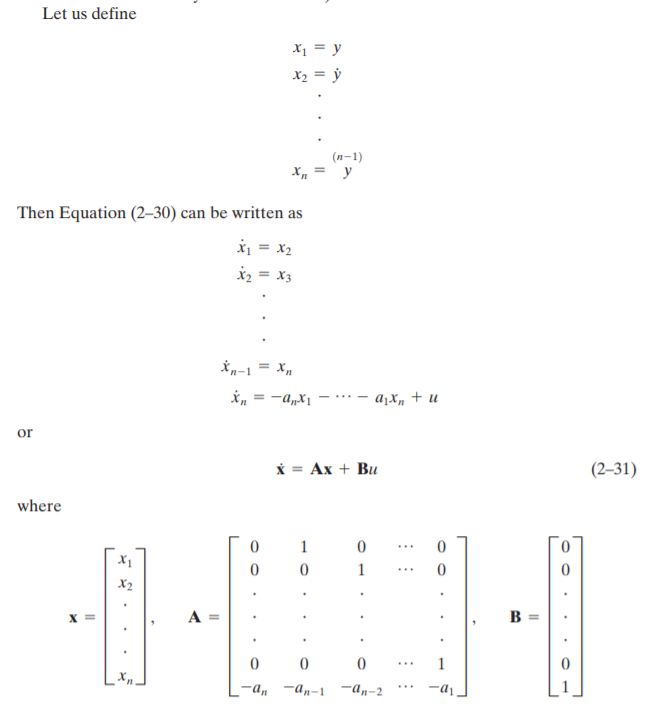 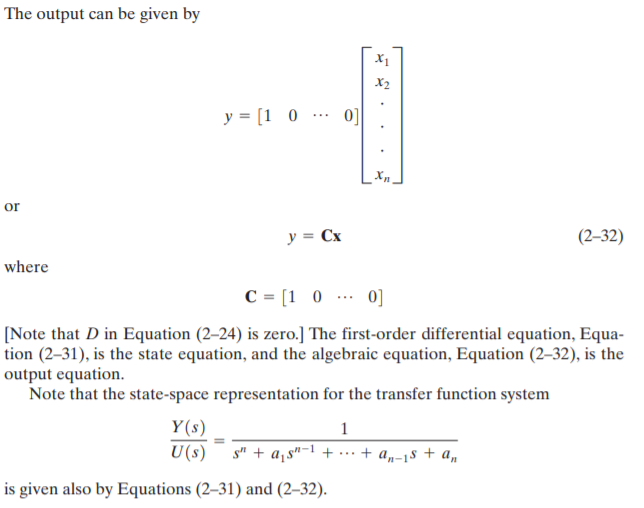 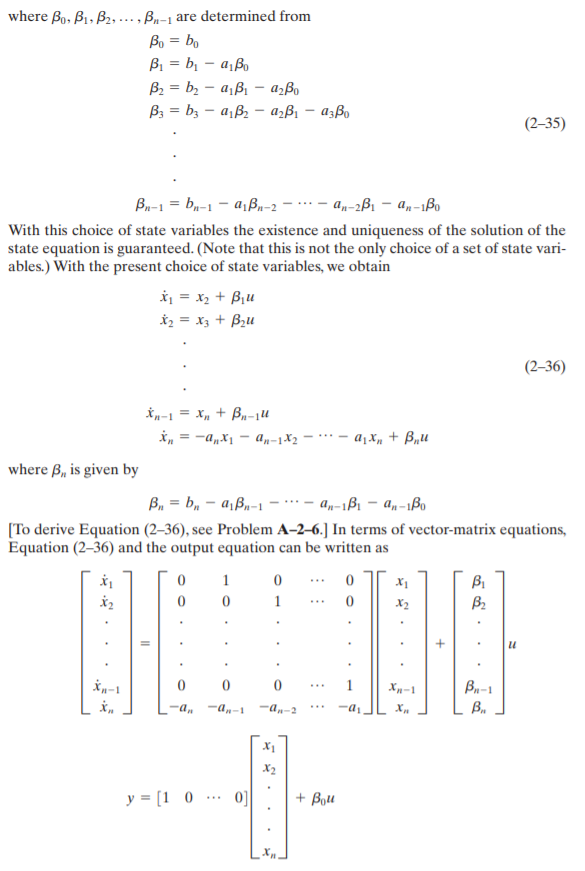