In our previous classes we had ​various devices that we could play with including and not limited to: resistors, capacitors, and inductors. We will call these "Basic Electronic Components" and if we were only given these devices to create things we would find it very difficult to create anything useful. This is the main reason that in most of the circuit theory classes you may have taken there were not many examples of useful circuits.
In this series we will lead up to talking about a bit more complicated electronic devices such as diodes, transistors(BJT & MOS), and op amps. With these devices available we can design much more sophisticated and useful circuits. However, because these devices are based on Semiconductors, we need to first understand semiconductors from a physics and chemistry standpoint.
Semiconductor Physics General Concepts
All atoms are composed of a nucleus, and surrounding electrons. The nucleus is composed of just protons and neutrons. A common question to ask is 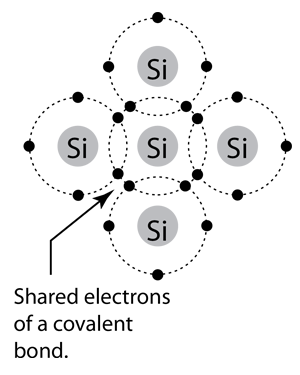 Fig 1. Bhor Model of a Silicon Crystal
At this point we are probably wondering if a silicon crystal is able to conduct electricity? So let's say that we hook up two the sides of the crystal two voltage leads and we will try to measure the current drawn form the crystal. In order for a current to move we would need some electrons to be free from a covalent bond to freely move from the higher voltage potential to the lower voltage potential. However, based on this model there should be 0 current flow since none of the electrons in the silicon are free. And if you were to perform this test in real life you would also find this to be true at absolute zero degrees C (at other temperatures electrons may come off of their bonds and become free allowing for some amount of current to pass through). So you can see at certain temperatures Silicon can conduct, it may not conduct as well as some other metals, but it acts as an insulator near absolute zero. At room temperature the conductivity of silicon is about 10^-10 times less than a metallic conductor, but also 10^14 times larger than that of an insulator. Pure Silicon (aka Intrinsic Silicon) has 5 x 10^22 atoms per cubic centimeter, it also has one free electron for conduction for every 5 x 10^12 silicon atoms. Thus, intrinsic silicon has about 10^10 electrons/cm^3 that are available for conduction.

Doping: Increasing the Conductivity of Semiconductors