This guide exists to teach you the ins and outs of the Circuit Analysis section of Electrical Engineering. These tutorials will try to go in depth as much as possible and will provide tons of extra resources to go further in depth about certain concepts. We will begin with explaining each of the components that will later be put together to create all sorts of electronic devices.
As an Electrical Engineer you need to start to develop a sort of "Tool Box" in which you learn the basics about certain components(Resistors, Capacitors, Inductors, ect.) and as a result, when you encounter a problem, you easily know when to use these tools to solve your problems. At first concepts may not click but keep in mind these concepts are not all simple, and may require you to reference these tutorials once again. My biggest note I can make is that if you do not use what I teach you, you will inevitably forget what I teach you. So I really suggest that once you learn new material, try to experiment with these devices and make some really cool stuff, and that will really reinforce the material in your mind.

Surprisingly, no. The concept is Electricity has been something that has tormented students as some arcane knowledge that is so complicated. But in reality all the phenomena that makes up the concept of Electricity can be explained by basic Chemistry and Physics. Let's start from the beginning, and please do me a favor and don't just skip this part! What might seem trivial, is actually a big portion of what ends up misguiding most people, and since these concepts build on top of each other it will cause even more misdirection later on.

Electricity from an Atomic Perspective 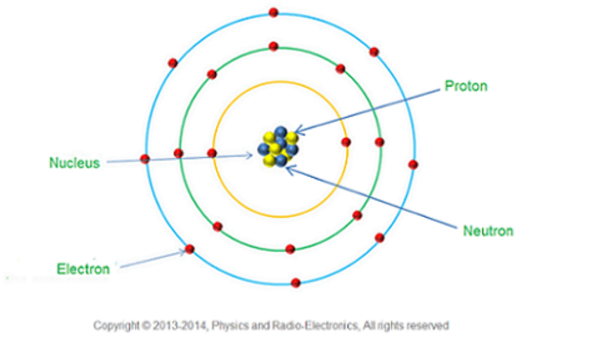 Atoms are the most fundamental building blocks of all mater (Yes I know there are items such as quarks that atoms are composed of, but we will ignore that for now since those are more relevant to quantum Mechanics). .All atoms are composed of charged particles separated into two parts, a nucleus (made of Protons and Neutrons) and a group of orbiting Electrons. It is important to understand that all elements on the periodic table are unique in their configuration of Protons, Neutrons, and Electrons and it is this difference that characterizes materials that are made from these elements.
​
Each of these charged particles have their own magnitude of charge:

What? I just thought there were only Protons, Electrons, and Neutrons? What are these other 2 you mentioned? Haha yeah, Antiproton and Positrons are known as Antimatter particles and they tend not to last very long since they will immediately annihilate themselves when they come into contact with Protons and Electrons, so you won't see much of them in these lectures unfortunately! (Cool part of physics though)

Now you will notice that you will see the value (1.6 x 10^-19 Columbs) quite often since this is the smallest amount of charge that we have ever been able to measure, it is known as the Elementary Charge (also known as +e). 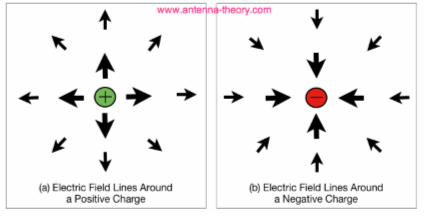 ​Surrounding each of these isolated charges is what is known as an Electric Field this is a region around a charged particle that can provide a force on other charged particles. To calculate the Electric field of a single charge at a certain distance away from the charge we can use the following equation also known as Coulomb's Law:

It is important to note that the sign of the Force will indicate the direction of the force. Naturally the vector E will point from the charge that is producing an electric field at the location of interest to the location of interest, so:
Once you are able to grasp how these charges create forces on one another, the known fact that school has taught you for a while finally starts to make sense, that: 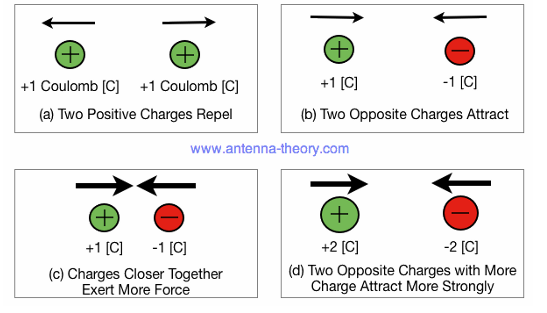 Knowing that a source charge has the ability to interact with other charged particles, this brings us to the concept of superposition, where multiple charged particles all provide forces on each other and need to be summed up in order to be able to tell the total force on each charged particle. 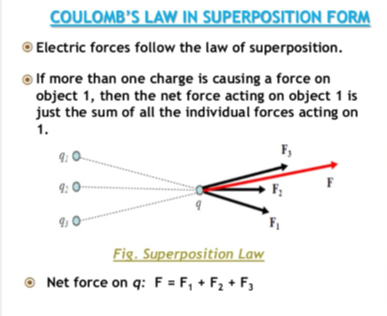 The Electric Dipole
Dipoles are one of the most fundamental constructs of electric forces since most molecules of matter will be composed of dipoles, where the presence of a positive charge and a negative charge exist right next to one another. Now in physics they will tell you that a dipole looks like the picture below, and you may wonder, well if the charges are opposite why wouldn't they be attracted to one another and just end up touching each other? However, in physics you are supposed to assume there is some unknown force holding them apart. In real life, dipoles do exist, such as with HCl, water, ect. But with these molecules the force that holds the charges apart is known as nuclear repulsion, but are attracted by electric field forces which keeps them a fixed distance away when the electric field force cancels out with the force of nuclear repulsion. Here is what a dipole looks like and what the Electric Field looks like at certain distances away from the dipole: 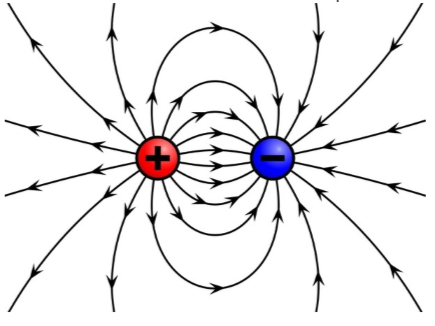 Okay the main question you are likely having right now is how this is relevant to the larger concept of electricity. What you have learned so far makes up the premises of how electric fields are created by the presence of multiple point charges within a material. If you are wondering where these point charges come from, the protons can either just be in the nucleus of the atoms or a free positive ions within a material, the electrons that make up the negatively charged particles are from the orbiting electrons of the materials atoms or as negatively charged ions. In metals specifically, a specific characteristic of these elements is that they have what is called a "sea of electrons". This sea is a result of the fact that the lattice structure that makes up metals is a result of metallic bonds. Remember in Chemistry we learned that there are 3 types of bonds: Ionic, Covalent, and Metallic. Ionic bonds occur between elements that are metals and non-metals and in this type of bond, valence electrons are able to be transferred from one element to another. Covalent bonds occur between elements that are both non-metals and in this type of bond valence electrons are shared between the two elements. Metallic bonds are just like covalent bonds, except they specifically occur between two elements that are metals, and instead of the valence electron being shared, it becomes "delocalized" and this why there exist a sea of electrons within metals (each atom of the metal has a metallic bond with surrounding atoms creating the lattice structure and producing a sea of free electrons).
​ 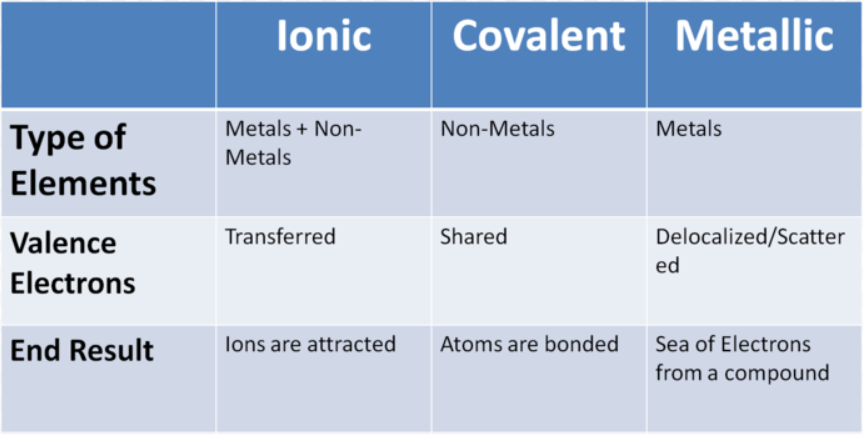 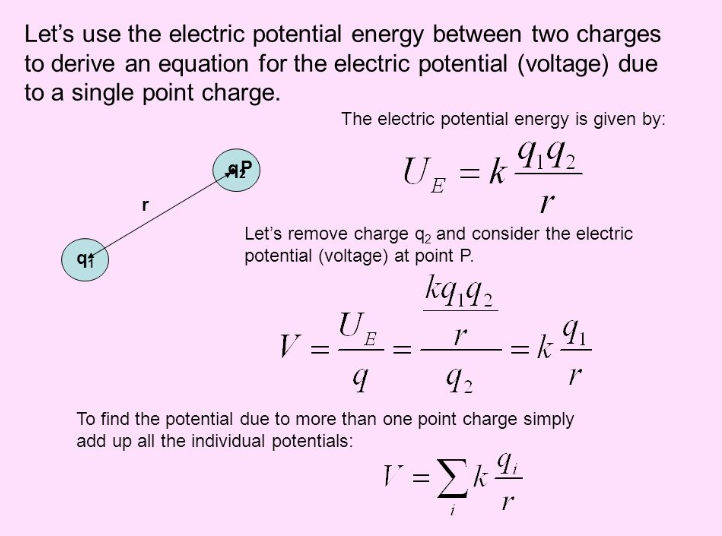 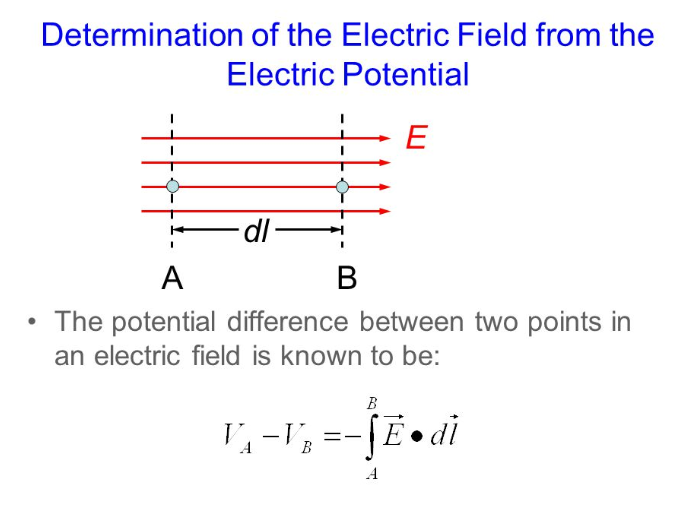 We have been talking a lot in terms of physics, but really what is voltage and why is it so important? The reason why voltage is so important is because on a higher level than just in terms of Electric Fields and Forces on point charges, we can use it to understand which direction charges will move within a material and really without the need to figure out which direction the Electric Field vector is pointing. ​

Most people are accustomed to understanding how water moves through a pipe, and that is the best analogy for understanding how electric current works. Electric current is simply a measure of total amount of charge from all of the charged particles that moves through a surface area within a specific amount of time, which is why its unit of measurement is an Ampere (which is simply defined as 1 Coulomb of electric charge divided by 1 second).
Now here is the part that gets everyone confused, and honestly is due to poor convention when scientists first defined what current is. When scientists first defined it they defined it to be the movement of positive charges. In reality positive charges really don't move since they are really fixed in place within the atomic nuclei since they are all in a lattice formation with metallic bonds, so it is the electrons that do the moving. The way scientist defined what we know as "Conventional Current Flow" was in terms of positive charges moving in a closed loop, and thus is defined to move from a high potential to low potential, which makes sense: If we have a high pressure tank, the gas within the tank will want to move to the area of lower potential. However, because electrons are negatively charged particles they move in the exact opposite direction. Let's look at why, but first we gotta understand a concept introduced in Vector Calculus known as the Gradient, this is the vector that points in the direction of greatest change increase(from low to high) and that E⃗ =−∇⃗ V  keeping in mind that ∇⃗ V means the gradient of the Voltage. Specifically with positive charges, the equation is: F⃗ =eE⃗ =-e∇V which means that the current will flow in the direction opposite of the gradient. However, for negative charges, the equation is: F⃗ =−eE⃗ =e∇V. which means that the current will flow in the direction of the gradient. Thus, electrons will flow from a low voltage to a high voltage.
Congrats, you now should understand all the physics and chemistry needed to understand what caused the phenomena of electricity!