Before getting into how to design rocket engines, it is important to understand how rocket engines operate, specifically in hybrid and liquid engines. This knowledge will be integral in making decisions later on about how to develop/manufacture the engine.
All Rocket engines produce thrust as a result of two inputs that make up the Propellant: an Oxidizer and a Fuel. The Fuel is pretty self explanatory, it provides a source of combustion that is capable of accelerating gas. The Oxidizer is also a very important components when it comes to any combustion reaction as stated in the equation that defines a combustion reaction. In order for there to be combustion, the inputs present need to be some hydrocarbon and oxygen, and as a result will produce carbon dioxide and water.

In a Hybrid Rocket, the Fuel exists in the form of a solid and really can be anything that burns. The oxidizer needs to be some concentrate of oxygen, it could be Nitrous-Oxide, Gaseous Oxygen, or even Liquid Oxygen. But this arrangement of a solid fuel (known as a "Fuel Grain")sits on the inner walls of the combustion chamber in the form of a tube and passing the oxidizer through an injector plate (which atomizes the oxygen) and flows through the tube as it burns it, further accelerating the gases to high exit velocities that in term produce the thrust to lift a rocket off the ground.
In a Liquid Rocket, the Fuel can take the form of either a gas or liquid. The oxidizer can also take the from of a gas or liquid concentrate of oxygen. However, in this arrangement, the fuel does not take the from of a tube and instead the gases are atomized through the injector plate to which they are mixed thoroughly and ignited and accelerate the gas to produce thrust. Liquid Engines are exponentially more complicated. The reason for this is because the more Oxidizer or Fuel you decide to have in the form of a gas or liquid the more complicated your fluid system will become. Unfortunately, you will find that it is not as simple as to just pipe two together into an injector plate and ignite it. In order for a rocket engine to not explode once ignited, the fluid must be regulated so that pressures within the combustion chambers do not become exceedingly high and result in a rupture in the engine casing. ​​

Shown above are the main portions of a rocket engine: the Injector, Combustion Chamber, and Nozzle.
madeThe injector is responsible for atomizing either the oxidizer or both the oxidizer and fuel before burning in the combustion chamber. The reason why this is so important is because the injector is made up of a series of extremely small holes also known as "orifices" what this will do is take large globs of the gas and disperse them further apart. Let me give you an example as to what happens if you do not have an injector plate. If you were to pipe say Liquid oxygen directly into the combustion chamber this would almost definitely result in an explosion of the entire engine, the reason for this because huge amounts of the oxidizer are being burn and as a result may cause a desire for the combusted gas to want to move back into the input piping route, this is known as a "hard start" and my lead to possible engine needing to be reignited or even explode the oxidizer tank if not regulated. Not only is this a safety risk since the injector plate functions as a pressure difference that prevents back flow of the gas back into the injector plate once through, but also the injector plate make engines a lot more efficient. The reason for this increased efficiency is because when large globe of the oxidizer or even fuel passes into the combustion chamber the most optimal thing to happen is that all of the oxidizer and fuel get burned also known as a "complete combustion". But in may cases what will actually happen with large globs of liquid if passed through only the outside surface of the liquid will burn and the inside will not have enough time to have combusted before leaving the rocket nozzle resulting in wasted oxidizer or fuel. So what the injector plate will do is act as a means to atomize/ disperse the liquid globs into small particulates that can result in a complete combustion, thus increasing the efficiency of your rocket engine.

The Combustion chamber is an important region of the rocket engine. The longer you make this section of the rocket the higher the ability for the gases to have enough time to have a complete combustion before exiting the nozzle. However, the draw back to making your combustion chamber really long is that your combusted gas will lose momentum(aka due to gas' velocity deceasing) and thus making your engine less efficient. So it is important to figure out the optimal length of this section of the rocket so that you fuel and oxygen maintain complete combustion and not lose too much momentum before entering the nozzle. This is probably also a good time to explain the fuel grain in hybrid rocket engines. We know now that the fuel grain is a tube of solid material that burns (ideally very slowly) and sits on the inside of the combustion chamber. However, what most do not understand is that a circular tube is not the most ideal Fuel Grain Geometry due to the fact that as the material burns from inside to out, the exposed surface area of a circular tube will increase as the fuel burns away (ie. the cross sectional circumference of the fuel increases) and this results in an inconsistent thrust output. Ideally we would like the output thrust of our engine to be constant for as long as possible before we run out of fuel/oxidizer, so what we need to do instead is find a geometry that the as the exposed surface area of the fuel grain burns away, the surface area does not change much. Tactics to get around this have been to make a circular tube outside with a star-like shaped inside extrusion cut out, and in this way since some lengths of the star will increase, while other sides decrease, the overall perimeter of the exposed surface area stays relatively constant.

The nozzle is the most magical part of this whole assembly. At its essence it converts Chemical Thermal Energy (Combustion of high temperature gas) into Kinetic energy (Thrust), as it is responsible for further accelerating the combusted gas and thus producing the thrust of our engine. 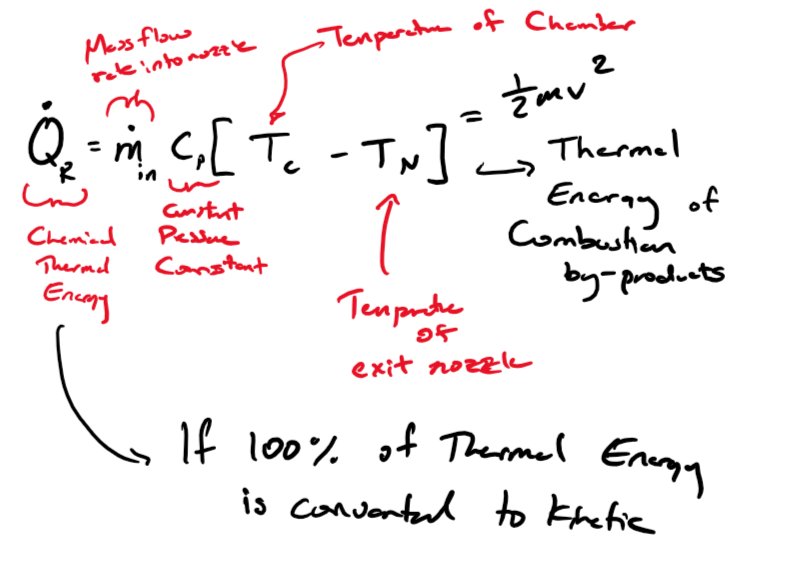 ​ A nozzle will take the inputs of the combustion chamber: High Pressure, High Temperature, and Slow moving gas. And convert that into: Low Pressure, Low Temperature, Fast moving gas. explain this part of the engine, I will be referencing multiple illustrations below: ​ 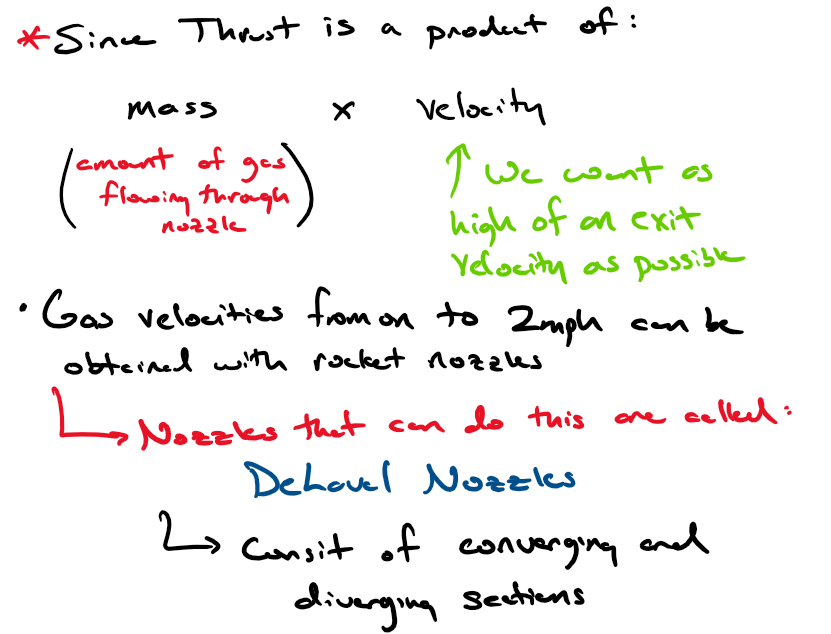 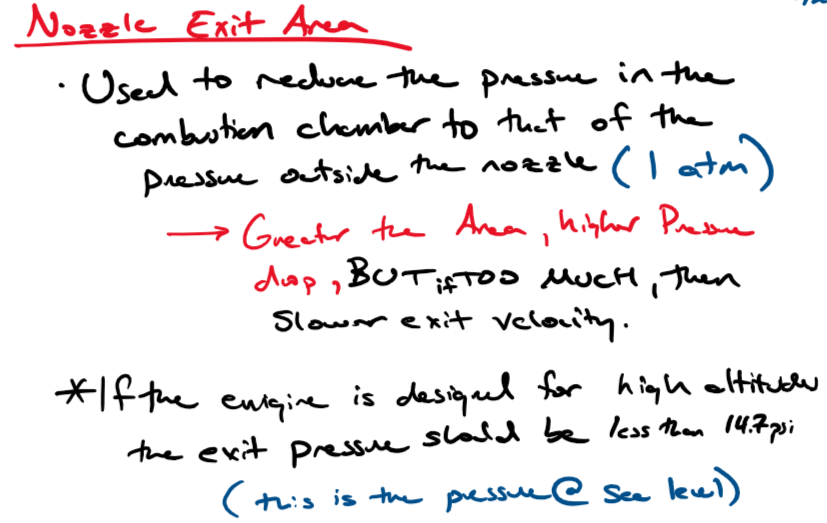 So far I have given you a lot of information as to the characteristics of the rocket nozzle, and how it functions simply to high pressure gases in the combustion chamber that are traveling at a relatively slow velocity and convert it into low pressure gases that should match the ambient outside pressure of about 1 atm and these gases should have an extremely high exit velocity. Higher gas exit velocities yields higher thrust. So how is it possible for a nozzle to accomplish this task of accelerating a gas by decreasing pressure?

In compressible fluid flow one of the most important concepts is the idea of fluid Mass Flow Rate, and it is a measure of how much fluid mass moves through a cross sectional area in 1 second, and its unit of measurement is [kg/s]. 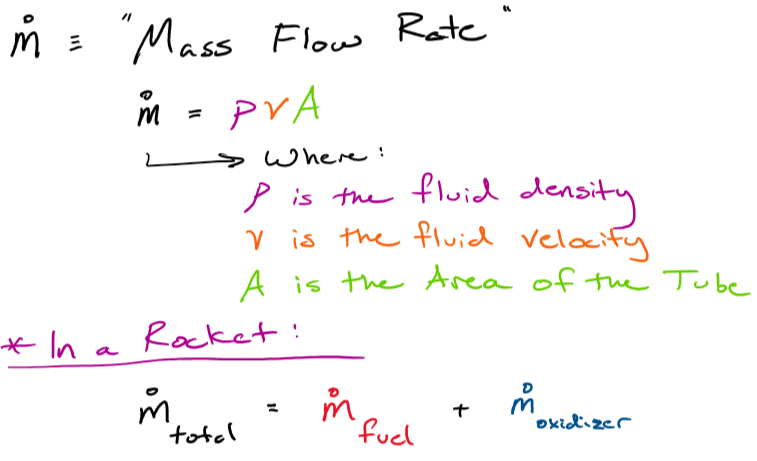 Now knowing this concept of Mass Flow Rate, we can analyze what happens in the nozzle. We had discussed above the most common type of nozzle that rockets will use is known as the Delaval nozzle. In Delaval nozzles, there exists 2 sections: a Converging section in which the diameter of pipe decreases, a Diverging section where the diameter is increasing, and the point where these two sections meet is known as the Throat.

The most fundamental function of the converging section of the nozzle is to perform choke flow, this is concept within compressible fluids in which given a specific cross sectional area of tube/medium that a gas can travel through, there exists a maximum amount of Mass Flow Rate that can move through that cross sectional area, and the maximum velocity that a compressible fluid can achieve in choke flow is Mach 1. Meaning, at some point regardless of how small you make the minimum cross sectional area of the nozzle (also known as throat area) this compressible fluid can only move through this area at Mach 1. This is why you cannot just make your nozzle throat area too small, not only are you making your nozzle less efficient, but this also makes your engine more prone for a nozzle to blow out the material around the throat or even explode. 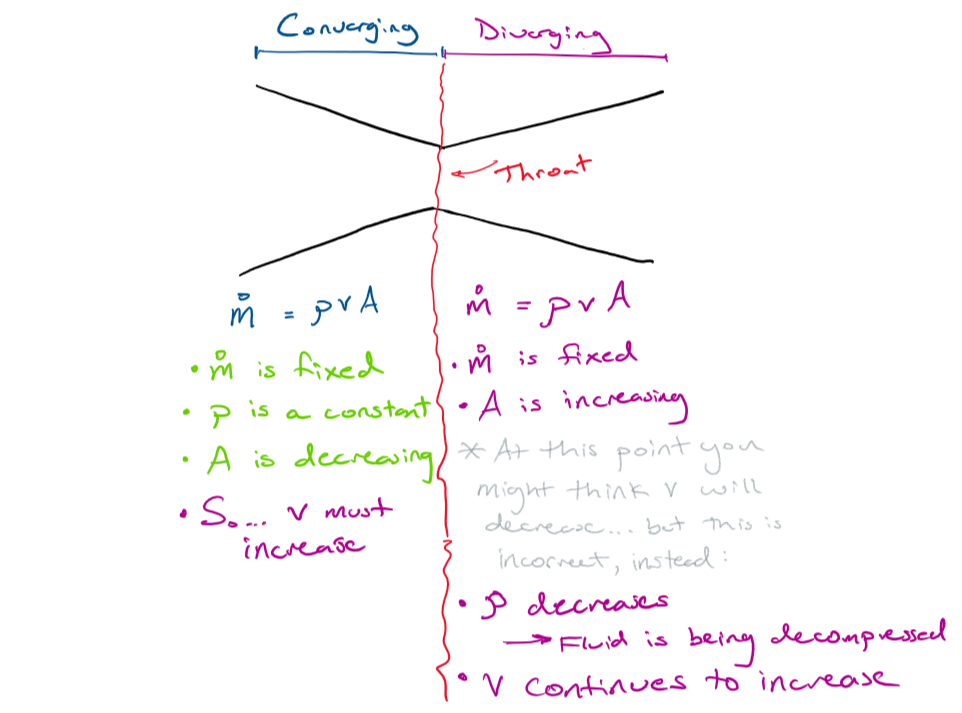 Now that we have discussed the portions of a rocket engine on a higher level, we can now go on to calculating the dimensions of each of these portions so that we get a specific output thrust.